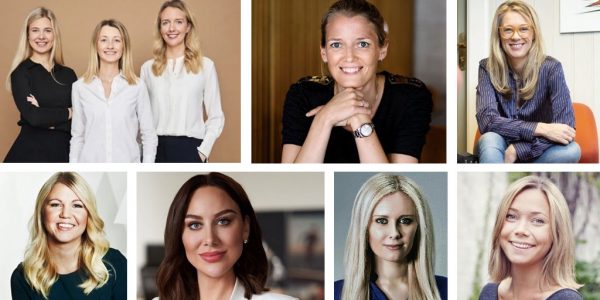 International Women`s day is here to recognise, inspire and empower women all over the world. Goodwille was founded by Annika Goodwille, a female who was passionate about promoting female entrepreneurship. Today we continue to support the Microloan Foundation, a charity helping women across Sub-Saharan Africa to work their way out of poverty through entrepreneurship.

In recognition of International Women’s Day, Goodwille have shortlisted 7 (well 9!) Nordic Women behind amazing tech businesses that we think deserve some more recognition.

Camilla, Emma & Anna founded the EdTech startup Female Invest back in 2017. Their drive is to close the financial gender gap, by educating women on investing and personal finance. This is done through a subscription-based e-learning tool which has gained a huge following on social media.

Since their journey started, they have become Europe`s leading financial educator targeting women with members in 55 countries, written a bestselling book on investing for beginners, and have been featured on the Forbes 30 under 30 list.

In 2021 they plan to scale internationally, so keep an eye out for these three women’s upcoming expansion plans and growing learning platform!

Maiken is behind “a new dimension of beauty” with her BeautyTech startup BeautyVision. BeautyVision is the leading Augmented Reality App for cosmetic treatments. The app is providing a 3D “try before you buy” experience for consumers to try out the newest cosmetic clinics, beauty brands and pharmaceutical companies.

The innovation behind BeautyVision and the whole “digitalizing the beauty industry” has led to BeautyVision being a finalist of the “Entrepreneur of the Year 2020”, and Maiken being a nominee of “Nordic Women in Tech Awards 2020”.

Beside BeautyVision, Maiken just started Female Founders Association, which is a community built by female entrepreneurs, with the aim to empower female founders in the Nordics!

Fighting food waste with Too Good To Go, Mette is leading a team of 750+ employees and collaborating with 50,000 supermarkets, restaurants, bakeries, hotels etc across 15 countries. Too Good To Go is the world`s largest marketplace for surplus food. Before Mette’s journey as CEO of To Good To Go, she was a co-founder of the fitness app Endomondo, which had 35 million users across the world.

Mette is a female entrepreneur, who works for a higher purpose by fighting food waste – while she even manages to make it a successful business at the same time. She is definitely one to watch!

Elina is CEO and co-founder of NaturalCycles. The world`s first app to be a contraception in both Europe and the US. She developed an algorithm that can identify the fertile window in a woman`s cycle. Elina`s skills, in particle physics, really showed off when she was part of a team that discovered the Higgs boson at CERN. The team received a Nobel Prize in physics! After that she started NaturalCycles, and now her mission is to pioneer women`s health with passion and research.

Back in 2015 she received the “Women in Tech Foundation`s Entrepreneurial Award”, and in 2020 she won the Nordic Startup Awards: “Founder of The Year”!

From politics to full time CEO and co-founder of Kara Connect, Thorbjorg is a real female entrepreneur! She started Kara Connect back in 2014, a workstation for professionals in Health & Welfare. Thorbjorg observed the problem with patients reaching therapy, because of geography & costs during her time in politics. That is why she created a platform that connects educators, healthcare, and therapy specialist with patients in three countries, including remote areas!

Featured by Forbes, World Economic Forum, Huffington Post, Tech.eu and Women Leaders it is safe to say that Caritta is a highlighted woman. Being the co-founder of Tespack, who has been awarded “Best Energy Startup” in the EU, and the “hottest tech startup” in Helsinki & Finland, she is a well-known woman in the tech sector. Tespack specialises in mobile energy with the goal of making everyone independent. Besides Tespack, Carrita is an ambassador for One Young World, which is a global forum for young leaders. She has mentioned: “Supporting and mentoring aspiring young entrepreneurs is where my passion lies”. Lookout for this inspiring woman!

Karen Dolva is using her technology skills towards social good with her company, No Isolation. She founded No Isolation back in 2015, designed to bring people together through technology with the aim of helping people break out of social isolation and loneliness. The first evolved product is a AV1 robot, which helps connect unwell children to their classroom peers while they are recovering at home! Karen started her entrepreneur journey with the start-up tech-incubator, StartupLab, in Oslo. She is also the co-founder of the consultancy company, UX Lab.

Karen has been featured by BBC, Financial Times, Reuters and many more, and was recently recognised in “Forbes` Top 50 Women in Tech” list. She is an inspiring tech female entrepreneur to follow!

It is inspiring to see so many females from the Nordics getting involved in technology, an industry that has previously been dominated by males.

To find out more about Goodwille, and the work we do to support Nordic businesses to enter, grow or scale in the UK, read here.