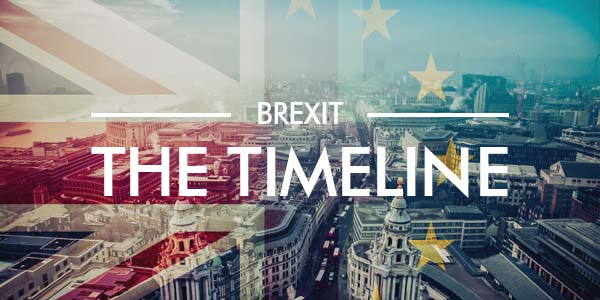 The United Kingdom European Union membership referendum takes place, commonly known as the Brexit referendum. It results in 51.9 per cent of votes being in favour of leaving.

The at-the-time Prime Minister Theresa May trigger Article 50 of the Treaty on the European Union, which begins the UK’s withdrawal.

The initial Brexit day, when the UK was originally set to leave the EU. However, the process is delayed as the Withdrawal Agreement drafted and negotiated by the then Prime Minister Theresa May was not approved in the British Parliament.

Theresa May announces she will resign as Prime Minister.

Boris Johnson is elected new leader of the Conservative party.

Boris Johnson becomes the new Prime Minister of the UK.

The UK is supposed to leave the EU, but the departure is yet again delayed.

General election in the UK.

The results of the General election are announced.

Brexit day. The UK is set to leave the EU on this date.

Want to keep up with the latest updates on the Brexit discussions?
Subscribe to Goodwille’s Brexit Newsletter to receive the latest news straight to your inbox!