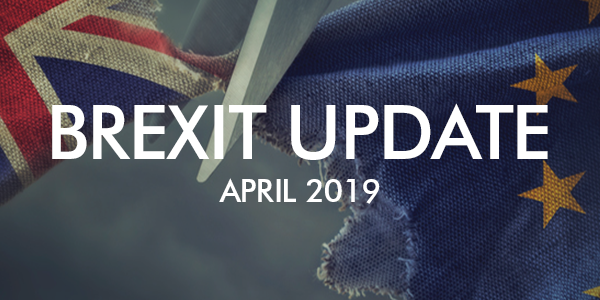 It’s been a while since our last update on the Brexit discussion so we felt it was time for another one, even if we are still waiting for a final decision as to how and when Brexit will happen.

What has happened since our last update?

Very little that has brought any clarity. Our belief that a delay was more likely than a No-Deal was confirmed when the EU accepted Theresa May’s letter to extend Article 50.

What happened on Friday?

Theresa May’s latest attempt to get her deal through failed, albeit by a smaller margin (58 votes).

What is going on at the moment in the UK Parliament?

Contrary to normal procedure, there are two parallel processes going on in Parliament at the moment. Theresa May and the Government are trying to get her Withdrawal Agreement through and the rest of parliament are trying to find a majority for anything. They failed at the first attempt, with another referendum coming closest even though it was heavily defeated back on 14th March. Most likely because a large number of MP’s supporting the Government is abstaining from the current parliamentary process. In a bizarre twist even if parliament found a majority for something, Theresa May could ignore it.

What are the EU doing?

The sentiment seems to be one of growing frustration amongst EU27. Albeit Leo Varadkar (Irish PM) and Michel Barnier (EU Lead negotiator) have added to the confusion stating that in the event of No-Deal that there would not be a need for Border checks between Northern Ireland and Ireland. This appears to contradict the most contentious aspect of the Withdrawal Agreement.

What appear to be the options now?

In essence, a No-Deal Brexit on the 12th April or, more likely (in our opinion) a long extension under conditions to be defined by the EU. Though there are still some lingering hopes by the Government that they might be able to get the Withdrawal agreement considering the narrowing margin of votes. Either way, Tusk has called a meeting of the European Council for the 10th April.

What has Goodwille been doing in the meantime?

We will continue to monitor the progress of the Brexit discussions, and will regularly send out updates via email and update our website with any recent news. Subscribe to our Brexit Newsletter to receive our updates directly to your inbox, and feel free to contact us if you have any questions on how Brexit will impact your business.