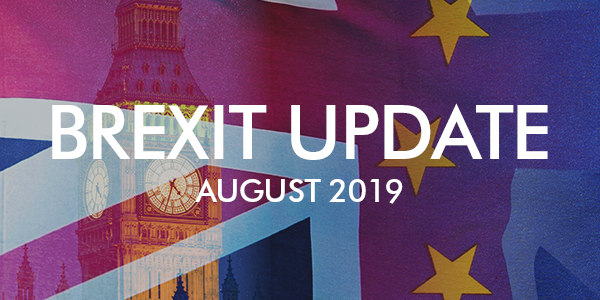 Last week, the British Prime Minister Boris Johnson visited his German and French counterparts, before going to the G7 summit in Biarritz, France. This was Johnson’s first appearance on the international stage since he took over the Premiership last month. Mrs Merkel and Mr Macron wish to avoid a no-deal Brexit as they think it would damage the EU and individual Member States, albeit less than Britain. However, the British Prime Minister is determined that the UK will leave the EU on 31st October 2019, with or without a deal.

Earlier this week, upon request from the Prime Minister, Queen Elizabeth II agreed to prorogue Parliament from the second week of September to 14th October 2019. The Prime Minister stated that the prorogation will give Government time to prepare for its “new and ambitious agenda”, and that there will be “ample time” for MPs to debate Brexit.

Prorogation is a formal mechanism to end a session of Parliament, normally lasting only a short time until proceedings begin again with a new Queen’s speech. It means Parliament’s sitting is suspended and ends all legislation currently under discussion.

Prorogations are not controversial in British politics, however this  prorogation has already been highly criticised. Critics include the opposition and the House of Commons Speaker John Bercow, as well as Tory MPs and the general public. A petition calling on the government not to prorogue Parliament has already been signed by over 1 million people. Critics argue that the length and timing of the prorogation is constitutionally wrong, and that the actual purpose of it is to stop Parliament debating Brexit, in order to hinder anti-no-deal legislation.