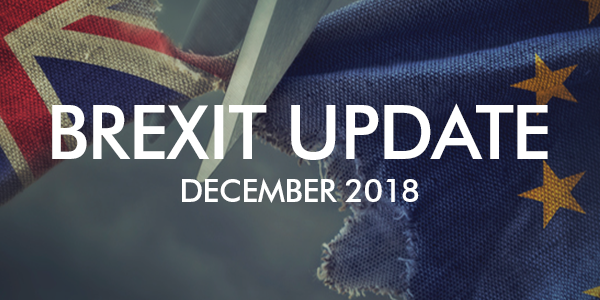 A lot has happened in the month since our last update! In the short space of time we have seen:

With less than 100 days to go, concern and frustration is growing – particularly since the default outcome on the 29th March is a No-Deal departure.

The message from Goodwille remains the same: to not read too much into media hysteria and instead watch the positions of the EU and UK Government closely. Neither side shows any desire to leave on No-Deal terms. Since our last email; however, we do feel the risk of No-Deal Brexit has increased – though we await further details from both sides as to what a No-Deal entails. We expect more detail to be drip-fed over the coming months.

Next Key Date: Between 7th and around 17th January 2019: House of Commons approves the Withdrawal Agreement and Political Declaration.

Next Update from Goodwille: Depending on the events over Christmas, we will be looking to send something out early to mid-January.

Brexit and EU migration: Is your status settled?

Whether there be a Deal or No-Deal scenario, on 29th March 2019 current EU rights of residence will fall away with the UK leaving the EU.  The UK Government published a ‘Statement of Intent’ in June 2018, whose focal point was not only to detail Britain’s attitude towards immigration in a post-Brexit era, but also to introduce the EU Settlement Scheme (EUSS).

The EUSS is designed for both EU citizens and their family members to obtain either pre-settled or settled status which will ‘replace’ the automatic rights they currently enjoy with the UK being an EU member state.

Upon Brexit, gaining formal settlement status via the EUSS is critical for all EU citizens currently residing in the UK. As stated by the Government, it will allow them continued and unhindered access to work, study and the right to receive benefits, healthcare, pensions, public services and countless other rights currently enjoyed by EU nationals living in the UK.

Therefore, Goodwille together with North Star Law, experts in immigration law, have answered 3 key questions, which are relevant to individuals, family members and employers. Follow the link to get started.

Alex Barker, from the Financial Times, noted that the EU does not address the Northern Ireland border, the EU budget and, to some extent, fish in the event of a No-Deal scenario.

See the EU’s published preparations for a No-Deal Brexit.

The UK Government’s White Paper on post-Brexit Immigration was published on Wednesday.  This outlines the Government’s plan to introduce a single immigration system and aims to end free movement.  Effectively, the Government will introduce a new, skills-based immigration system where the workers’ skills are valued above their country of origin. Further to this, the system aims to continue to attract the best and brightest workers without overlooking British citizens. However, the proposed minimum income threshold of £30,000 has been met with criticism. Read the full white paper here.

What we are reading

We will continue to monitor the progress of the Brexit discussions, and will regularly send out updates via email and update our website with any recent news. Subscribe to our Brexit Newsletter to receive our updates directly to your inbox, and feel free to contact us if you have any questions on how Brexit will impact your business.