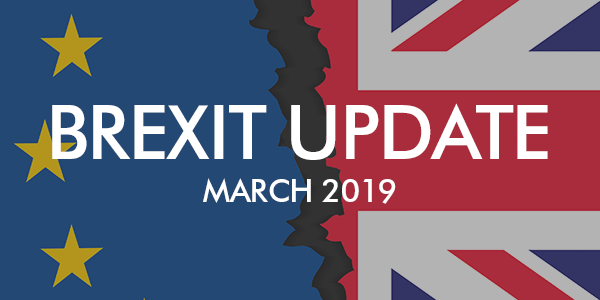 With goalposts constantly moving and timings changing, we want to give you an update on the latest of the Brexit negotiations.

What are the new dates we have to contend with?

The new Brexit date is set to be 12th April 2019, assuming MV3 (third meaningful vote, i.e. parliamentary vote on Brexit) does not get passed, however there are uncertainties whether this needs to happen this week. Otherwise it will be the 22nd May 2019. There is also a possibility of a longer extension to prevent a No-Deal scenario, but this will need to come with a clear direction from the majority of Parliament.

What are the indicative votes happening today and what power do they have?

There are 7 options, which still need to be defined (soon to be announced), including everything from ‘Remain’, ‘Revoke Article 50’, ‘Another Referendum’, ’Various forms of customs union and single market access’, a ‘Free Trade Agreement’ to a ‘No-Deal’. It is worth noting that these can all be ignored by the Prime Minister, although it might lead the Parliament to take more powers back from the Government.

Is a No-Deal likely?

At Goodwille, we see the risk of a No-Deal increasingly plausible, but still not very likely to happen. This is based on the fact that the Parliament does not want a No-Deal (as voted by a majority to express no desire to exit in this manner) and neither does the EU (particularly Ireland).

Will there be a hard border in Ireland?

This remains more unclear than ever and is heavily politicised due to the history of Ireland and Northern Ireland. Both Leo Varadkar (Irish PM) and Michel Barnier (EU Lead Negotiator) have recently come out stating that in the event of a No-Deal, there will be no hard border and checks will be taken away from the border. Though by Barnier’s own admission, there will need to be checks on animals crossing the border. As it stands, the question of hard border and checks remains unresolved.

Do business have more certainty?

At present, we do not feel there is certainty given the question of how the UK might be leaving the EU and the date keeps getting extended.  There is also a possibility of UK not leaving EU (No Brexit) and specific details are yet to be defined by both UK and EU governments.

Which type of businesses might be most impacted by a No-Deal?

Going by communication from UK authorities, we foresee issues more significantly for those importing/exporting goods to/from the EU (mainly by freight) and also industries that are heavily regulated, such as finance or biological/medical etc. Air cargo will not be as heavily impacted due to investment in technology to improve processing of paperwork.

What can businesses do?

As frustrating as it is, assuming you have taken action on the recommended items highlighted in the previous newsletter updates, we have to wait until the Parliament has taken a final decision.

We will continue to monitor the progress of the Brexit discussions, and will regularly send out updates via email and update our website as and when we feel there is a meaningful development. Subscribe to our Brexit Newsletter to receive our updates directly to your inbox, and feel free to contact us if you have any questions on how Brexit will impact your business.