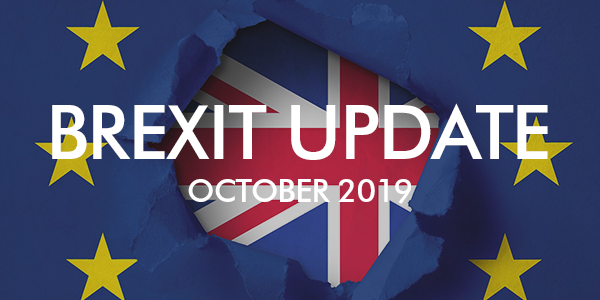 In this Brexit update from early October 2019, we take a look back at the events of the last month and give you a glimpse of the format of regular bulletins we will be sending in the run up to the current October 31st Brexit date.

Prime Minster Boris Johnson has been fighting the EU on one side and UK Parliament on the other. In an attempt to be able to focus on getting a deal with the EU, or enable a no-deal Brexit depending on who you believe, the PM prorogued parliament, basically shutting it down, for 5 weeks on 10th September. This was later ruled unlawful by the Supreme Court and Parliament was subsequently re-opened on 25th September.

In an attempt to prevent a no-deal from happening in October, Parliament took control of proceedings and enacted a piece of law intended to force the Prime Minister to extend Article 50, should no deal be forthcoming in the negotiations with the EU. In the days preceding the law passing, and during the fallout after, the Conservatives ended up losing their majority in parliament.

In a frustration for the UK government, Parliament has rejected calls for a General Election. The opposition maintain it is to ensure a No Deal exit cannot happen. With Boris maintaining that he needs the threat of no-deal to get the EU to move its persistence to push for the Withdrawal Agreement, which has thrice been rejected by the UK parliament.

Any documents or plans the government have so far presented to resolve the current impasse in negotiations, have been rejected by EU as not doing enough to replace the Irish Backstop. Opposition parties are concerned Boris Johnson is just trying to look busy and whittle down the clock to a no-deal Brexit.

In the UK it is party conference season, where parties decide their latest policies. The Liberal Democrats and the Labour Party had theirs during the shutdown of parliament. In a bizarre twist the upcoming Conservative conference is happening with Parliament still running, due to the Supreme Court ruling. Requiring Conservative MP’s to need to shuttle back and forth from London and Manchester.

Talks of a Government of National Unity

Since Boris Johnson lost his majority in the UK parliament, there have been widespread rumours of the possibility of a Government of National Unity to take control of proceedings. The only problem with this is no one seems to be able to decide who that should be and what price that support would cost.

Sign up to Goodwille’s Brexit newsletter to receive regular updates on Brexit straight to your inbox!