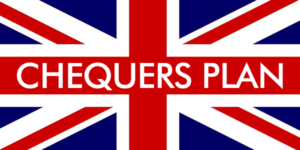 The Chequers Plan is a potential agreement presented by the British Government on 12th July 2018. The purpose of the agreement is to retain certain areas of the pre-Brexit arrangements with the European Union and to ensure a smooth transition from EU dependency to Brexit independence.

In the table below, 4 of the main points of the Chequers Plan are outlined and compared to the current agreement applied through the UK’s EU membership.

The restriction will require for EU citizens to apply to work and/or study in the UK, and vice versa.

The regulations chosen by the British Government may have trading consequences.

A shared customs union, common agricultural policy and a common fisheries policy ensuring standardised quality and quantity control.
The UK will leave the customs union, common agricultural policy and the common fisheries policy to regain control over these areas, allowing the UK to set its own quotas and price levels.
The European Court of Justice interprets EU law and ensures that the laws are applied equally across all EU member states.
A joint institutional framework will be put in place to interpret UK-EU agreements. In the UK, this would be done by UK courts and, in the EU, this would be done by EU courts.

Any decisions by UK courts would need to take into account the EU laws affecting the Common Rule book.

The Chequers Plan is intended to provide the UK with an independent trade policy with freedom to implement its own tariffs and trade barriers independently of the EU’s laws. However, the UK will take steps to ensure continuous smooth trade between the UK and the EU by keeping a common rule book.

Further to this, The UK aims to take control over people entering the country to work and study, as well as restore the supremacy of British courts and end the European Court of Justice’s role in UK affairs. Lastly, it seeks to end the annual contributions paid to the EU and reduce these contributions to only be paid for joint actions in specific areas.

If you wish to look into the agreement with greater depth, the following links provide additional information and clarifications of the above:

‘The future relationship between The United Kingdom and The European Union’, published on 12th July 2018 on gov.uk.

‘What is the Chequers Deal? Theresa May’s contentious plan explained’ by Simon Rushton, published on 17th October 2018 on inews.co.uk.

‘What Is the Chequers Brexit Plan? Everything You Need To Know’ by George Bowden, published on 4th September 2018 on huffingtonpost.co.uk.

‘Chequers Brexit plan explained – what is Theresa May’s EU proposal and will MPs vote against it?’ by Tariq Tahir and Aletha Adu, published on 15th October 2018 on thesun.co.uk.