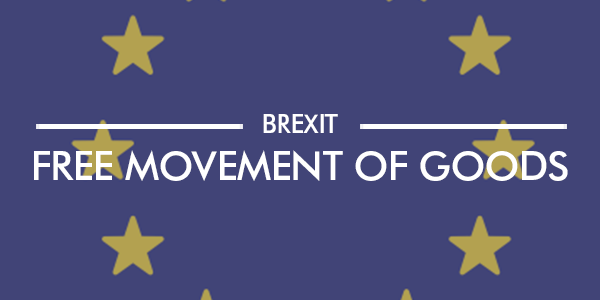 The free movement of goods is one of the cornerstones of EU law and business. It essentially is a two-sided coin, and provides for tariff‑free access to the single market and the elimination of non‑tariff barriers such as product regulation and approvals.

The issue concerning the status of UK rules vis-à-vis laws pertaining to the movement of goods and services, as well as changes to the VAT system, increasingly captivates our interest day by day. As the UK hopes to achieve a bespoke agreement, the British government will seek to maintain the closest relationship with the EU and, as UK Prime Minister Theresa May was heard saying during her Florence speech, a frictionless trade agreement between the bloc and the UK. The Draft Withdrawal Agreement published on 19th March 2018 supports this approach. One of the clauses both parties have agreed on stipulates that any good that was lawfully placed on the EU or UK market before 31st December 2020 should be able to continue to circulate freely until reaching the end-user. The existing rules on free movement of goods will largely remain in force during the Transition Period, with some applicable exceptions.

These developments are at least an interim departure from Mrs May’s ruling out of remaining in the single market or customs union. It remains to be seen how the post-Transition Period deals with the matter of freedom of goods, but future developments do not necessarily threaten frictionless EU-UK trade. UK industries and their respective sectors are highly integrated with the single market; the Office of National Statistics (ONS) state that over 59% of UK imports are of EU origin, whilst 48% of UK exports end up within the community.

It would not be in Britain’s interest to lose free-trade access to the EU, as the UK would lose access to countries with which the EU and European Economic Area (EEA) have also been negotiating free trade agreements. Moreover, a weakened Pound Sterling at the outset of the June 2016 Referendum, has seen demand for UK-built goods abroad increase, as exports became cheaper, and tourism saw improvement, where visiting the UK became more affordable. There is scope to protect frictionless trade in goods and services and to secure proper VAT processes following Brexit.

VAT and the flow of goods and services are symbiotic, and they will adhere too much of PM May’s rhetoric concerning the maintenance of seamless trade with the EU – predictability. Voices that declare that Brexit means “taking back control” are purported, as past decisions made by the European Court of Justice will be influential in the continued interpretation of VAT law in British law. The EU VAT Directive have been soaked up by British courts, and this is another signal that the path Britain is taking concerning goods, services and VAT will be governed by the virtues our company seeks to aspire to: predictability and reliability.

Additionally, issues concerning the future of services or goods do not seem to be so challenging at this stage, many self-accounting rules for VAT on services bought from the EU will remain broadly unchanged and there could be further opportunities; especially if one considers that EC Sales List declarations may not need to be completed. This suggests an orderly process of transposition and transition in a post-EU UK as being the name of the game.

In areas concerning the exchange and freedom of movement concerning technologies, the UK seeks to maintain its position as a leading provider and market for hi-tech industries. Upon reading the UK’s Industrial Strategy Paper in November, the UK seeks to increase innovation by raising total research and development investment to 2.4% of GDP by 2027. Over £1 Billion will be invested to boost Britain’s digital infrastructure, £176million for 5G and £200million invested to foster full-fibre networks in the UK. Equally important is the UK’s drive to invest £20 billion into innovative and high potential businesses.

If you have any questions about Free Movement of Goods,
get in touch with Alexander Goodwille,
CEO at Goodwille.
alexander.goodwille@goodwille.com