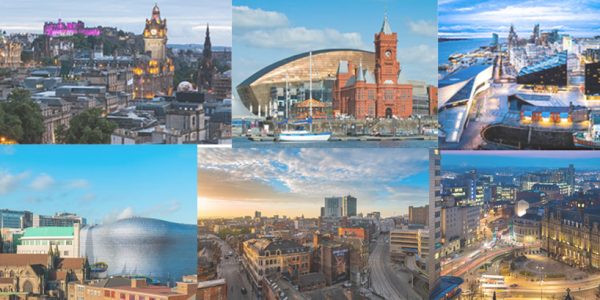 When you think of the UK, one of your immediate associations will always be London. The English capital has long had a reputation as the lifeblood of commercial trade and technological hub of the country. However, in recent years, this notion has started to be changed due to financial and cultural reasons, meaning budding start-ups are looking at establishing elsewhere in the UK.

The Financial Incentive for Businesses to Move Away from London

Historically, in choosing to set up in London you are guaranteeing high quality city infrastructure, fibre and links to the rest of the country and an entrepreneurial community, making it a great option for tech companies. However with many companies choosing to set up in the English capital, it has started to become highly saturated which has therefore driven up the financial implications involved; You are looking at paying a premium on the likes of office space, staffing and business rates. Due to this, it can be argued that London is no longer the most financially viable location for a business looking to establish in the UK.

Notably, other prominent UK cities have poured significant funding into improving their business climates in order to rival what London has to offer, with local governments providing lucrative initiatives to attract new businesses. Typically the government invests in enterprise zones within larger UK cities to encourage a fertile climate for businesses to flourish. These enterprise zones are designated areas that provide government support and tax breaks.

Many businesses are opting to move to regions where there is a high cultural capital. This culture is born from factors such as historical landmarks which garner high levels of tourism and cultural reputation. Furthermore, many regions within the UK are historically tied to specific industries which has allowed them to become highly concentrated in terms of business type. Therefore it is becoming increasingly common that newly establishing businesses will look to start up in regions that align with their business type.

“There are numerous reasons why many companies are choosing to focus on the Midlands and the North of the UK, not all of them related to the lower costs of setting up in these regions. Retention of talented staff is certainly less challenging than it is in London. Furthermore, there are significant clusters in key sectors spread across the North and the Midlands.”  James Gordon-Orr, Northern Powerhouse Overseas Investment Officer, F.C.D.O.

Interestingly, many companies are beginning to find great value in choosing to establish in Scotland, especially with Edinburgh and Glasgow.  It’s important to note that Scottish companies can still hire & trade in the UK, and, likewise, England and Wales can fulfil the same function into Scotland. If you’re looking for a greener option than London, Scotland is fast becoming the UK leader in regards to renewable energy. With mass offshore wind farms powering the majority of Scotland, it is well ahead of the curve in its aim to reach net zero emissions.

Edinburgh and Glasgow offer the ‘London business lifestyle’ but with lesser costs. Edinburgh boasts four universities which helps it cultivate a thriving business population and talent pool. It is home to blooming financial centres and tech industries but also leans heavily on its historical landmarks that drive high rates of tourism. Further still, Glasgow offers an effective and sustainable business infrastructure thanks to it receiving heavy investment to become a ‘future city’ with initiatives such as the Glasgow City innovation District born as a result. This, alongside a rich history and culture, has made Glasgow and increasingly popular region to establish a company.  Comparatively, Scotland has one of the higher concentrations of universities in Europe with over half of the working population having some form of higher education.

With the second largest city population in the UK, Birmingham has become a significant and diverse region for the UK economy. It’s largely known for its growth during the industrial revolution where it became home to manufacturing and engineering, meaning there is a high concentration of this business type in the area. Whilst it is still an expensive option, it is far cheaper than London and has great transport links to the rest of the country. Furthermore, Birmingham houses five universities, having one of the highest active business populations in the UK. Perhaps this has contributed to them being chosen to host the 2022 Commonwealth games which will provide plentiful opportunities for upcoming businesses. Despite having plenty of positives in its favour it must be noted that business survival rates are relatively low.

Rivalling Birmingham as a major UK city is Manchester. Like Birmingham it rose to prominence during the industrial revolution with a flourishing textile industry. However it is now widely acclaimed for being an incredibly important media hub which makes it an attractive prospect for media start-ups that are looking for a great place to network. It is home to two enterprise zones – one for innovation/technology and another for travel links/infrastructure – so can offer a lot by way of supportive initiatives. Despite being rich in culture, the cost of living is generally quite high and has a relatively low business survival rate.

Labelled as a city of creativity and community culture over the years. The community culture element is a feature of entrepreneurial spirit and is aided by an effervescent university population with three major universities. What’s more Liverpool’s geographical location on the River Mersey has meant that it’s always been a significant trading port which continues to play a great role in its economy. Moreover business costs are relatively inexpensive and there are financial initiatives in place for current and newly established businesses. Notably, there are business support districts focused on aiding specialised business’. For example, Knowledge Quarter creates a supportive environment for businesses in scientific research, digital technology and arts.

Emerging as one of the UK’s top businesses hubs, Leeds is a great all-round proposition for newly established businesses. Yorkshire’s largest city has a diverse economy predominantly headed by financial and legal services, offering financial incentives for new start-ups through their enterprise zone. What’s more the city is home to four universities, and relatively cheap in relation to business rental costs, which contributes to it having a high ‘active business population’.

has started to garner far more interest as a location for start-ups in recent years. The Welsh capital has historically been an important trade port and was highly significant in the coal industry. More recently Cardiff has become a growing centre for sport and tourism. It has two universities, a solid infrastructure and offers financial initiatives to support newly established businesses through its enterprise zone. Significantly, Wales as a whole has started to become renowned for its supportive business ecosystem, offering plenty of start-up support ventures, recognition ceremonies and co-working spaces.

A Post-Pandemic Perspective to Work in the UK

Following the pandemic, people’s attitudes and perspectives on life have shifted and this has had a direct impact on the way that we view work. Increasingly, people are choosing to work remotely which means the demand for office space has significantly decreased, and peoples work locations have become far more transient. As a result the talent pool from which a growing company can choose has significantly deepened outside of London. Furthermore, as aforementioned, companies are now realising office space is far less significant than before so see this as a means of cutting costs.

How can Goodwille help you expand to the UK?

Are you a company looking at expanding to any of these areas in the UK? Here at Goodwille, we are incredibly well versed in advising startups on the most successful ways to effectively navigate the UK business climate. This could be through setting up a subsidiary or registering a branch or hiring talent in the UK. We offer advice and services to make sure your business thrives in the United Kingdom. Get in touch with us today to learn more information about how we can help you.